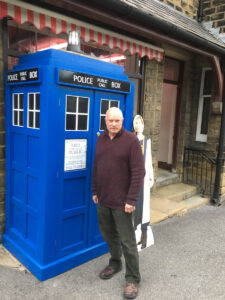 Whittaker will star in a new six-part series later this year, and three specials next year, before she exits.

In a statement, Whittaker paid tribute to Chibnall and the Doctor Who team, adding: “I will carry the Doctor and the lessons I’ve learnt forever.”

Chibnall, who appointed the actress to replace Peter Capaldi in the role, has been in charge of the BBC One series since 2017. 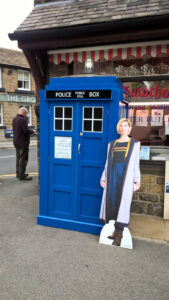 It has not yet been announced who will take over from Whittaker in the leading role.

“In 2017 I opened my glorious gift box of size 13 shoes,” Whittaker said in a statement. “I could not have guessed the brilliant adventures, worlds and wonders I was to see in them.” (Read the full original article here).

Photo: who1.uk site author standing next to the TARDIS made by Jodie’s dad and a friend, outside the butcher’s shop in Skelmanthorpe (aka Shat) in Jodie’s home village of West Yorkshire.